An Anecdote About Bob Fleck:
Bookman to the End

On October 16, 2005, I gave a talk on William Targ (1907-1999) at the monthly meeting of the Florida Bibliophile Society.  Targ was a Chicago writer and publisher of books about books, who later became editor at World Publishing Company and then Putnam's.  I had brought some of Targ's books about books with me and after my presentation, Lee Harrer, a founding member of the society, picked up my copy of Targ's American First Editions And Their Prices, Chicago, 1930. 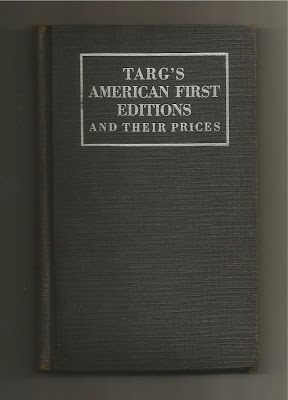 I had mentioned in my talk that this copy was formerly owned by Alida Roochvarg, a name that only one other person in the room was probably aware of, and that was Lee.  Alida Roochvarg, (1922-1993) a Long Island book collector, had a sizable collection of books about books, which Lee knew was acquired by Oak Knoll Books.  And the Oak Knoll book label attests to that fact. 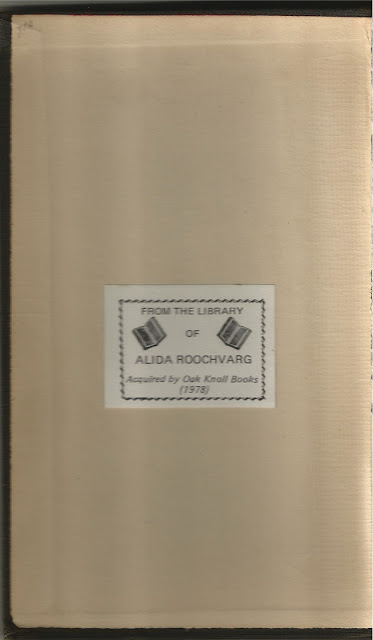 Lee had a sizable books about books collection himself (ten times bigger than mine), many books of which he had  acquired from Oak Knoll Books (me too). In fact, Lee was very good friends with the Proprietor of Oak Knoll Books, Bob Fleck.

Bob Fleck was a chemical engineer–that was his day job.  But he was also a book collector.  And when his day job was going to be relocated to a different city, he  made a career change.  On a Friday in 1976, he was still a chemical engineer.  On the following Monday, he became a bookseller.  And his acquisition of the Alida Roochvarg Collection in 1978 was one of his biggest early ventures.

Lee Harrer had an aha moment when he first examined the Targ book.   He was surprised to find a post card from his friend Bob Fleck that was inserted in the book.  The post card was postmarked 28 Nov 1978––almost 27 years earlier!  It was addressed to a book collector in Pennsylvania by the name of William J. Junkin. 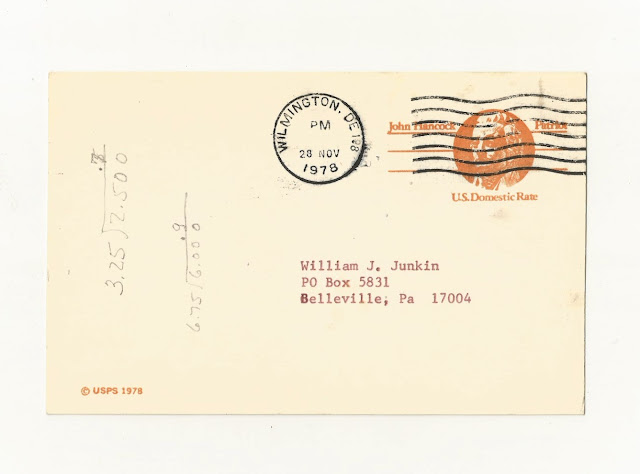 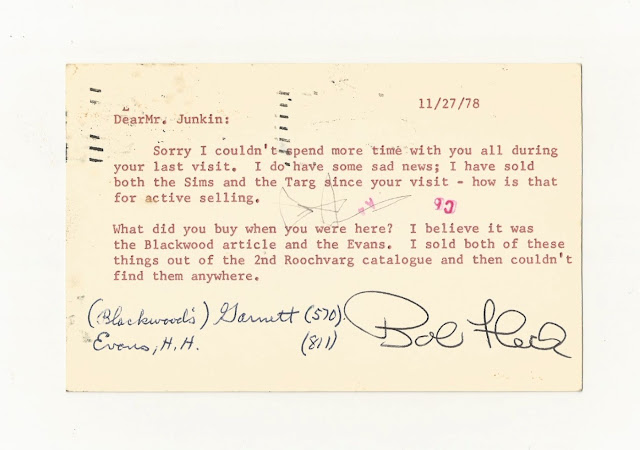 Lee made a copy of the post card and sent it to Bob Fleck.  Lee assumed that Junkin wrote the handwritten notes.  And four days later Bob Fleck verified that fact. 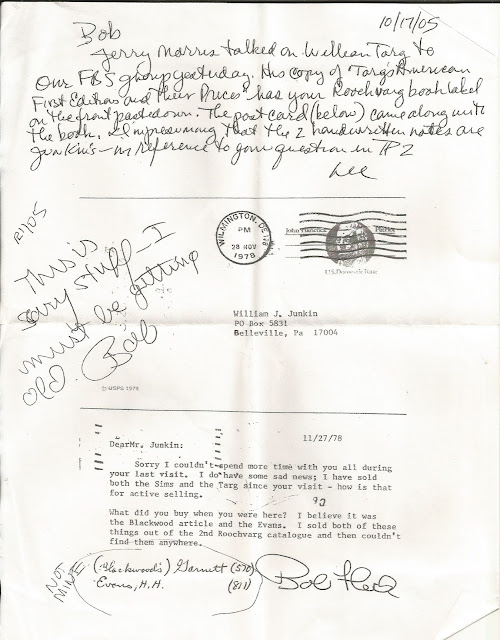 If the handwriting on the paper copy of the post card is unreadable, here's a translation:
10/17/05
Bob,

Jerry Morris talked on William Targ to our FBS group yesterday.  His copy of Targ's American First Editions and Their Prices has your Roochvarg book label on the front pastedown.  The post card (below) came along with the book.  I'm presuming that the 2 handwritten notes are Junkin's––in reference to your question in p [paragraph] 2
Lee

This is scary stuff––I must be getting old.

And he wrote "Not Mine" next to the two notes.

William J. Junkin wrote the two notes, which refer to the listings of the Garnett and Evans books in Oak Knoll Catalogue Number 11.  Junkin surely had a copy of that catalogue, and he may have later acquired the combined copy of all six catalogues of the Alida Roochvarg Collection, which was published in 1981 (Catalogue Numbers 10, 11, 14, 17, 19, and 22). 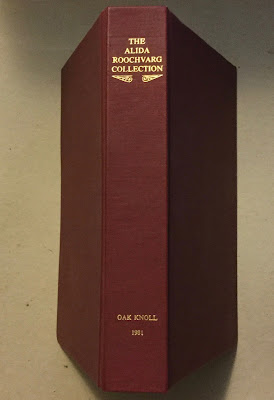 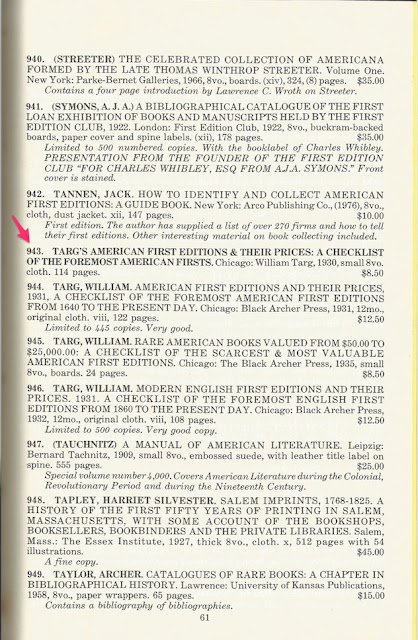 William J. Junkin was born in Lakeland, Florida, attended Lakeland High School and later moved to Pennsylvania.   He passed away in May 2016.   In his obituary,  it was noted that Junkin "was a collector of rare and first edition books."   He was also a railroad enthusiast, and wrote articles in railway magazines.  It was also noted that William J. Junkin "would like to be remembered as a bookman to the end."


Bob Fleck:  Bookman to the End

I just attended the Oak Knoll Fest XIX last weekend in New Castle as an exhibitor. I assure you there were many fond reminiscences of Bob and also condolences to his wife and son.

Bob was instrumental to the formation of the Fine Press Book Association which has an international membership and now supports three major shows: Oxford, UK, Manhattan and the oldest and most fun - Oak Knoll Fest.

Though he passed away just before our event that Oak Knoll Books was once again hosting Bob insisted in meetings with the family and workers that the show must go on.

Bookman to the end indeed and a great loss to all of us who love books and especially books about books.